Archive for the category “Photography”

A few weeks ago a fire gutted the Laramie Vision Clinic on 408 South Second Street, and closed the entire block for about five days.  Though most of the businesses are open again, the Vision Clinic’s neighbors are taking their time.

One neighbor, the Lost and Found restaurant, hopes to open officially the week of June 9. But that doesn’t mean they’re idle. 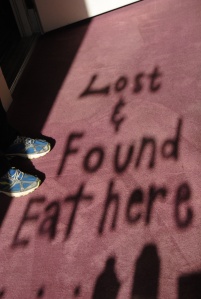 Apart from drying their building after its soaking May 24, the restaurant staff prepared a meal for the Wyoming Entrepreneurs and Small Business Development Center.

The WE and SBDC are operate through the University of Wyoming, and offer educational and advice centered resources to small businesses.  Lost and Found is a client of theirs.

The preparations began around 4:30 in the afternoon. The interior of the building was still disordered with furniture huddled together for safety. Alex, a main server, moved the furniture and set out five tables in a line for the evening banquet.

The tables were covered with white cloths, and set, temporarily with plates and cutlery to ensure the guests would have space. 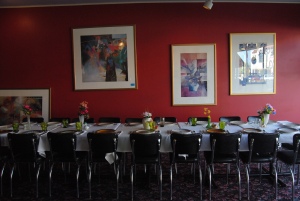 The table was set with white cloths and eclectic dinner ware

Like the name suggests, the dinner ware had the eclectic feeling of an antique store. The plates were a blend of patterns including floral and cheetah print, while the cutlery ranged in design from colorful, plastic coated handles to sturdy feeling knives and forks.

But the preparations were not complete. There were still dishes to do and meals to make, most of which would come after the guests arrived.

When the WE and SBDC arrived, Mike Armstrong, the owner, gave them a short tour of the space before dinner, while the servers for the evening, Alex and Simon, prepped waters for the party of 20.

Meanwhile, in the kitchen: Miki Hudson, the Lost and Found chef and owner of the catering business Hart’s Alley, was busy making salads, and prepping the main course for the evening.

The meal began with salads. Some were simple – greens with a light sauce – while others where the “Strawberry field”: a base of spinach, with gorgonzola, homemade balsamic vinegar, blue cheese, strawberries, and locally sourced vegetables.

Following salads was the main course: Ratatouille, a combination of squash, eggplant, zucchini, tomato, and local herbs, nestled on a bed of chicken and curry flavored Israeli cuscus, which was then slow baked for three hours. 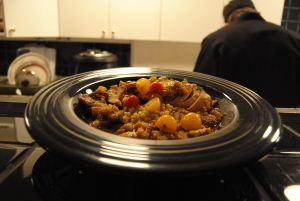 Ratatouille with chicken and couscous

Ratatouille is a French peasant dish, and Chef Miki Hudson said she likes these slow-bake peasant foods because they follow the theme of “Lost and Found”:

“No one has time to make them anymore,” she said. 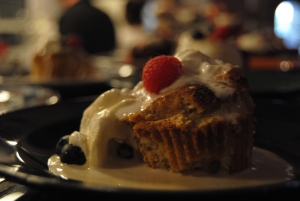 As the evening came to a close the guests expressed their satisfaction with the meal, and the restaurant staff began the clean-up. 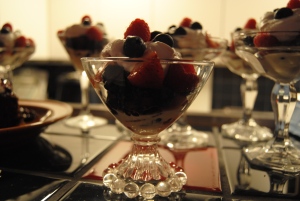 Though it’s tempting to go into detail on the process of clearing tables and washing dishes, these are things best left for another dinner that they may be, for the moment, lost, and later found by another writer. 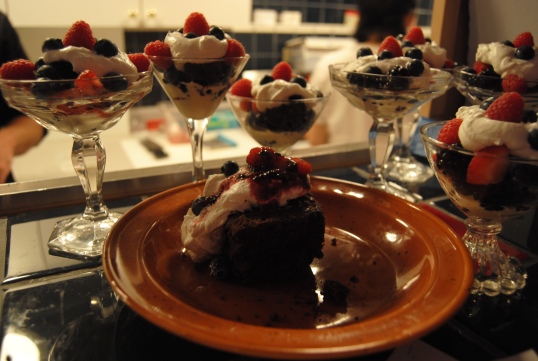 December Comes in June This Year

The release date for December has been set for June 2014; I’ll the specific date later. For the time being I thought I’d publish a picture of the book and show that, yes, this book is more than words on a screen. 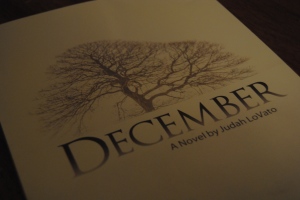 A picture I took of the proof copy of December. I think the cover folk did well.

You’ve told me before that you rather enjoy watching the progression of puzzles coming together, and since I’m uncertain whether you have any to watch “grow” where you are, I thought I’d trace the progression of our most recent library puzzle for you. 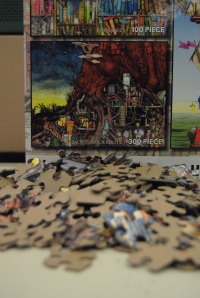 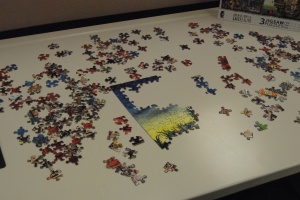 The morning of the second day, by that afternoon the border was complete. 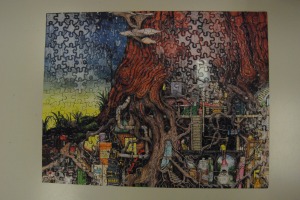 This morning (March 6) the puzzle was complete. A 300 piece puzzle completed during 20 hours of library operation.

So there you have it. I’ll aim for more progressions for the next puzzle: a 500 piece puzzle called Noah’s Ark. 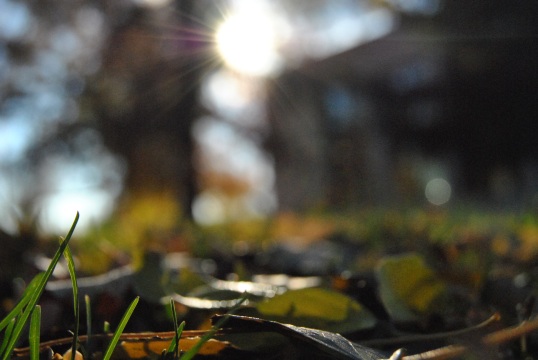 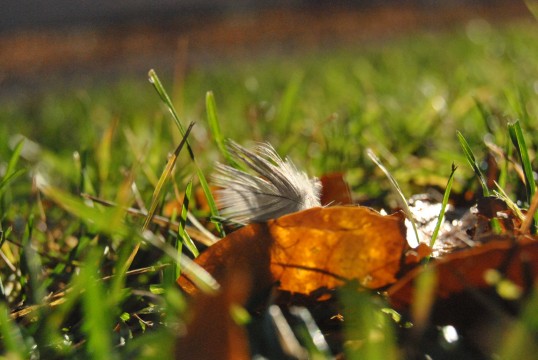 A feather fell amongst the leaves, one autumn afternoon- 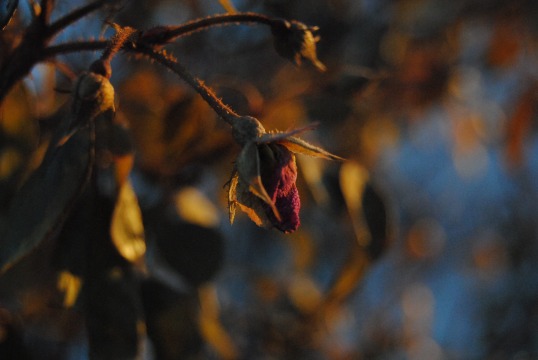 In the evening fell a rose 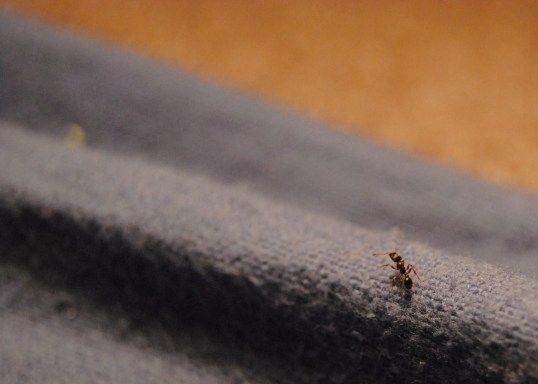 Please see my “Portrait of the Artist” page for my (at last completed) artist statement. I hope it brings a little more clarity to my work both current and future. 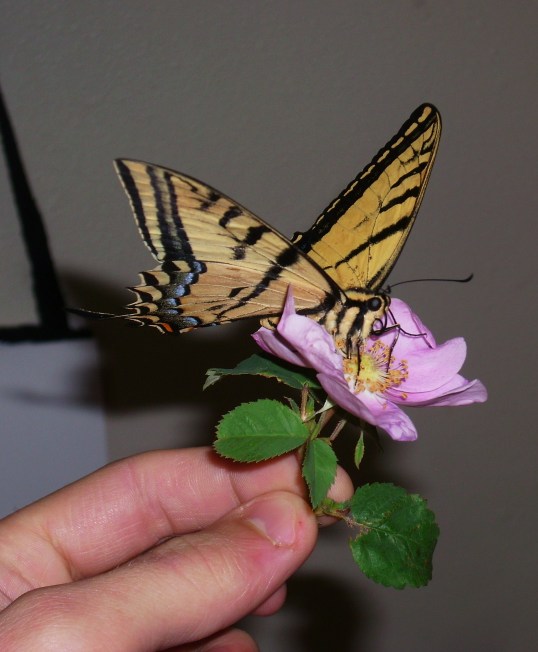 Part of my newest gallery: Butterfly Effect. Seven photos of a butterfly’s impact on an average day. 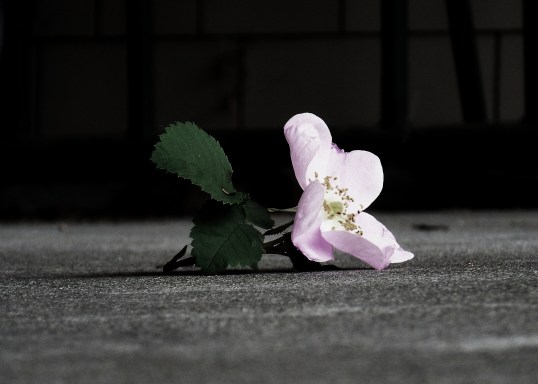